This week, President Donald Trump signed executive orders to revive two controversial oil pipelines. While the moves may help oil and gas producers in North Dakota and Canada, the energy sector in Texas has been plowing ahead on its own turnaround.

Texas already stands apart from most oil-producing states because it avoided a recession after oil prices plunged in late 2014. Now the beaten-down segment is showing renewed life.

Jobs in mining and logging have grown for three months in a row, reversing a long string of declines. Several companies recently closed billion-dollar deals in the Permian Basin and one buyer predicted that oil production would soar there over the next several years. The Permian produces over 2.1 million barrels a day, almost twice as much oil as the next largest field in the U.S., according to government estimates.

The Texas Alliance of Energy Producers, which has 3,000 members, just released an index that showed oil and gas activity rose in December for the first time in 24 months. It appears that the industry bottomed out in the fourth quarter of 2016, said Karr Ingham, petroleum economist for the group.

“This is the moment we've been waiting for,” Ingham said on Thursday. “There’s still a lot of pain in the market -- companies that were lost, jobs that were lost. But we’re on the way up again.” 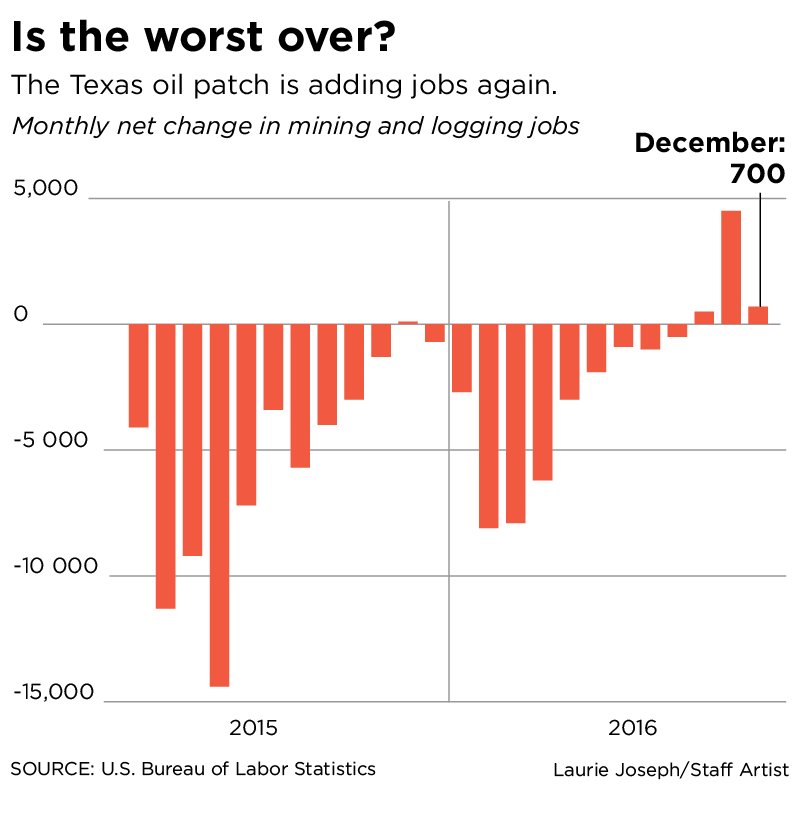 The Federal Reserve Bank of Dallas said several measures strengthened in the oil patch, including employment and production. The outlook for the oil and gas industry has improved dramatically, it said.

In a survey of 147 oil and gas executives, many reported plans to increase drilling, capital spending and hiring. Some complained about rising prices for land leases and deals in the Permian, another sign of a recovering market.

Employment in the energy industry stabilized in the second half of last year, helping to lift job growth for the state, said Dallas Fed senior economist Keith Phillips.

“With that positive momentum, the Texas economy enters 2017 poised to shift into ‘second gear,’ ” Phillips said earlier this month.

The Permian, which stretches from west Texas to eastern New Mexico, has become the focus of recent activity. Daily oil production has roughly doubled since 2012, and natural gas and condensate volumes are up sharply, too.

This week, Plains All American Pipeline said it agreed to buy a Permian oil gathering system for $1.2 billion. The company said it expects production in the area to double in the next several years.

The economics are so strong in the Permian that some companies can make a profit at $30 a barrel, said Bruce Bullock of the Maguire Energy Institute at Southern Methodist University. That’s pushing new investment.

He pointed to some major Permian players, including EOG Resources, Apache and Marathon Oil. They’ll boost capital spending by over 50 percent this year, according to Credit Suisse estimates.